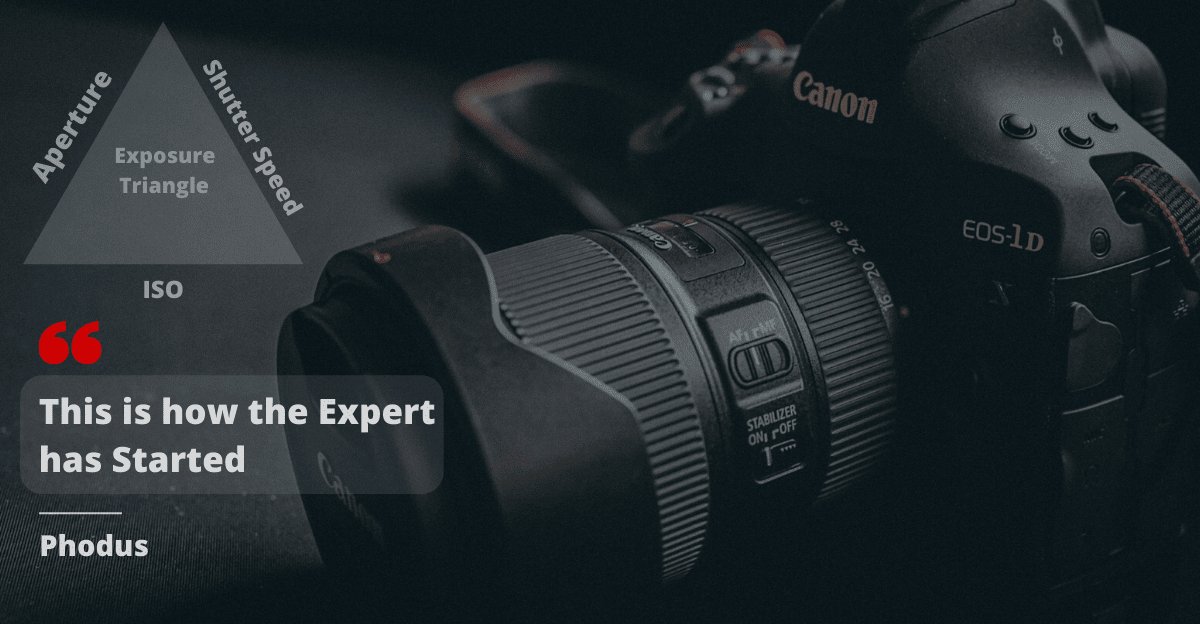 Learn How to Master Exposure triangle

The exposure triangle is the foundation in photography. It controls the light that forms an image. It can help you become a better photographer. As it is doing to the professionals. They have achieved it by mastering it.

As a beginner. You might find it difficult to understand it. It might get confusing and time taking.

It is not difficult, it’s a mindset. You can learn and develop it. You need to get appropriate knowledge and practice. In this article, I have made it easy for you to understand and execute it.

Let’s jump into the material,

What is the Exposure Triangle in Photography?

The exposure triangle is a combination of three essential elements. That consists of Shutter Speed, Aperture, and ISO. These three pillars when performed together represent the Exposure Triangle.

Let me break it down to make it more simple to understand the photography triangle.

What is exposure to photography?

Exposure is how bright or dark your image will be after being exposed to the light. It is the effects of lights to form the picture. The image can be overexposed, underexposed, or correctly exposed.

“The input of light that makes the photographs brighter, or darker is exposure in Photography”.

Let’s take it another way. If you give priority to any one of these three components. You have to compensate/manipulate with the other two or with both to get the correct exposure in the image.

For example:(According to your photographing needs)

Now you have to compensate/change the aperture or both to achieve a properly exposed image.After freezing your second priority may be to achieve a shallow or wider depth of field.

For shallow use, fast aperture and for wider DOF use a small aperture, and then you can compensate with the ISO.While compensating. Remember to achieve a correct exposure image according to your photographing needs.

Fast aperture will bring more light. Now you have to compensate with the shutter speed and ISO or with both to get a well-exposed image.

The same priority system is with the ISO. That’s why these three master components are the exposure triangle. As they are connected.

Here is the final word for Exposure Triangle.

You should also know this,

What are EVs in Photography?

EVs are the exposure values. It is the common value of all the three elements .i.e Shutter Speed, Aperture, ISO. The combined value of these three settings is called exposure value (EVs).

These three are interrelated to each other. Increasing or decreasing the values is referred to as “stop”. Doubling or halving the amount of light is called a stop.

Let’s now discuss these three variables of the exposure triangle.

There is a shutter in the camera body. Which opens when you press the shutter button to collect the light for a particular duration. It is like the curtain of a window. When you open it light gets in the house.

Shutter speed is measured in seconds or in fraction of seconds i.e 1s or 1/125s.

When you set a fast exposure. It helps you to freeze the moving subjects and collect less light also. So for correct exposure, you have to compensate with the aperture and ISO or with both.

When you set long exposure. It helps to create motion blur in the picture with more light. The motion blur happens if anything is moving in the frame. Now you have to compensate with Aperture and ISO or with both to get a correct exposure.

The best example of a motion blur is a waterfall. You can see the sense of movement in the water. These types of photography can be used as creative photos.

With fast shutter speed, the subject will freeze with less light and a sharper image. With slow shutter speed, motion blur will create with adding more light. And for correct exposure, you have to manipulate with Aperture and ISO.

Aperture is the amount of light that will enter into the image. The opening and closing of a diaphragm in the lens through which the light passes to the image sensor.

In the shallow depth of field, the subject is isolated from the background and foreground. The subject is more in focus and the rest of the unwanted elements in the frame are out of focus.

Out of focus leads to blurring images. Which is another effect of the aperture?

The best example is portraits photography, where the face of the model is in focus and sharp. And the background is blurry.

In a wider depth of field, everything in the frame is in focus. Which means the images are sharper from foreground to background. You can see Smaller aperture in landscape photography and architecture photography. Also in wide-angle photography where you want everything to be in focus.

Group photos are also a good example of a wider depth of field(small aperture).

Aperture has many other byproducts also. Like it creates bokeh, sunburst, lens flares, and lens diffraction. You can use these effects as artistic photography.

ISO in photography means “the sensitivity of the light to the image sensor”. Once the light has passed the lens and shutter, the ISO controls and decides how sensitive the image will be.

You can set the ISO sensitivity by the ISO numbers available in the camera. It is also measured in stops. ISO no. starts from 50 or 100 depending upon cameras. The largest ISO these days goes to millions.

Taking pictures with noise and grain isn’t a bad choice always. Something it can be seen as an artistic point of view. Which will produce creative photographs?

To achieve high-quality images try to keep the ISO as low as possible.

It has two modes to select, one is Auto mode and the other one is Manual mode. In auto mode, the camera decides the ISO according to the light situation. In manual mode, you can set the ISO no. yourself.

You can find the ISO setting in the back screen of your camera or on the above display. You can change the ISO no from the dial available in the body or from the back screen. You can also see it in the viewfinder.

Here is the myth about ISO:

Many say ISO stands for Image sensitivity optimisation. Which is not correct at all. The ISO stands for “ International Organisation for Standard”. It is the regulatory body that sets standards of many Industries.

So now you know about exposure triangle explained in this article. It’s time to practice it. As said earlier it’s all about mindset and you can have a growth mindset. As you also know about Shutter speed, Aperture, and ISO.

Take your camera and press the shutter button. Do as many experiments as you can and practice more.

If you are still left with any confusion. You can ask me in the comments section. I would love to hear it from you.

How much time will it take to learn the Exposure triangle?

Well, it depends on you. If you give your time to learn and practice. You can command over it in minimal time.

What is Aperture Priority Mode?

In this mode, you can set the aperture as per your photographing needs. The camera will control the Shutter speed and ISO automatically.

What is Shutter Priority Mode?

In this mode, you can set the shutter speed as per your image needs and the camera will control the aperture and ISO.

Bokeh means blur. It is a quality of background blur.

What type of photography can I do after learning the Exposure triangle?

Does the exposure triangle have any other effects?

Yes other than affecting the exposure. It helps in creating creative photography. Like freezing, motion blur, creating bokeh, or using grain as an artistic point of view.

What is Image Stabilisation?

IS is a mechanical feature available in the camera lens. Which helps in avoiding camera shake. You can freeze the image at slow shutter speed also like between 1/60 1/100s. IS is only found in ZOOM lens

How is the exposure triangle measured?

The elements of the exposure triangle are measured in stops. One-stop equals a doubling or halving of light.

What are the available apertures in the lens?

What is compensation in photography?

Compensate, compensative, or compensation. You will hear this word a lot in photography. It means changing any of the exposure elements for the best exposure. Adjusting one element to full fill the required exposure. which occurred due to the other elements.

For example, You want to freeze the fast-moving subject. You set the fast shutter speed to say 1/2000s. As fast shutter speed comes with less light the image will get darker. So to full fill the darkness and get a bright image. You have to compensate it with the aperture or ISO or with both.