Top 10 Wildlife photographer You should Know 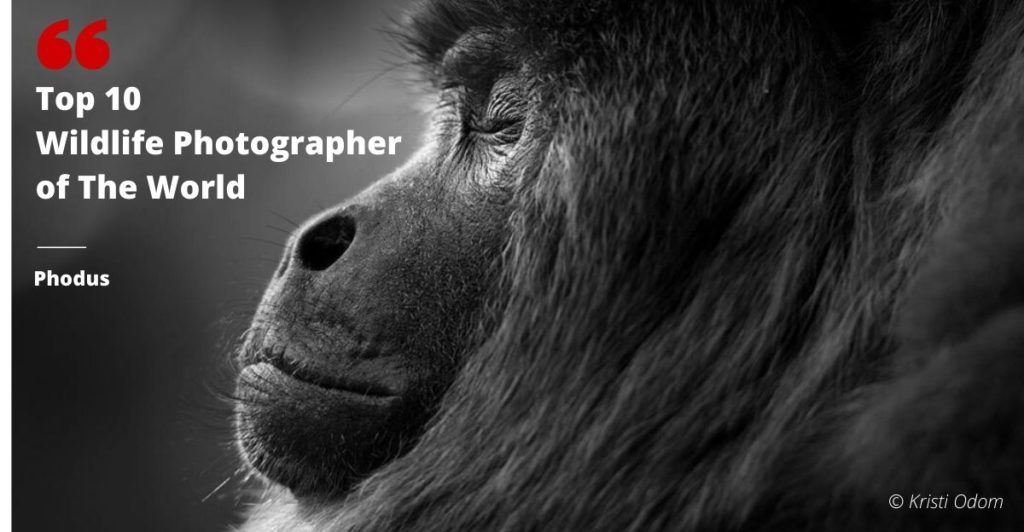 Inspiration to the followers of wildlife Photography

Wildlife Photographers knows it well how to put their steps into the wolf den. They know how to step into the lion’s house and even they also know how to give Hi-five to the whales deep inside the sea.

Yes, it true we all have seen these activities but in photographs. How did you get the opportunities to explore the wildlife sitting on your couch? Who is providing us with such images? Are the animals sending it via email?

They are the wildlife photographers who put their life, time, money, and energy to produce such photographs to the world.

Imagine if there were no such photographers. You would have never seen the unseen wildlife exist on our planet.

The following parameters have been taken to pick them up.

So let’s jump into the article and check out their images and about them.

Top 10 wildlife photographer to get inspiration

Brain Skerry specializes in underwater photography. He is one of the world-renowned marine and underwater wildlife photojournalists. He is a National Geographic photographer and Nikon Brand Ambassador.

He has been a contract photographer for National Geographic Magazine since 1998, covering wildlife and other stories.

He was fascinated by water from his childhood only. He fell in love with the sea as a child. He started scuba diving at the age of 15. Now he is exploring the world of ocean over 40 years.

He has worked on overall seven continents and in almost all marine environments. At an earlier stage, he discovered that photography is the best way to discover the sea.

The last year 2019, Brian has received the NOGI Awards for Arts ( The Underwater Oscar). Let’s check his 40 years of achievements.

He speaks over photography, explorations, and conservation issues. Some of his lectures are as follows.

The brain is the founding member of the International League conservation photographers and is also associated with many Authorities.

If you are a budding photographer and want to excel in wildlife photography. Even going more specifically if you love diving into the ocean. You should follow Brian and learn from his 40 years of experience.

Art Wolfe is a wildlife photographer from the USA. He says his home city is Washington. Though he has traveled all the seven continents to know the wildlife. It has been five decades capturing the beauty of nature and wildlife.

“It is in the wild places, where the edge of the earth meets the corners of the sky, the human spirit is fed.”

He has covered hundreds of locations in many different projects. His style of photography is to educate the viewers. His photography is based on art and love for the environment. His goal was always to focus on conservation issues.

Wolfe has written many books and has also worked for national geographic magazines.

Wolfe has won many awards and recognition in his photography career.

He has worked with companies like Canon, Microsoft, Nikon, Fujifilm, and many more.

He operates his stock agency, office, and production company in Seattle, USA.

Keith knows how to grab the viewer’s attention into his photography. I bet you once you visit his gallery. You won’t be able to stop yourself looking at his images until the collection comes to end.

He is a photographer at National geographic and a Nikon brand ambassador. Who knows his passion for skateboard and mountain climbing will lead to a professional wildlife photographer.

His unintentional drive for adventure in the mountain for the search for natural lights and wildlife made him a photographer. The love of rock climbing and taking it to the edge has helped him to work with world extreme sports. Also with world top athletes, ad agencies, and outdoor clients.

His main focus is in photographing natural environments, climate change, extreme sports, ad campaigns. He has visited all the 7 continents multiple times for various assignments.

He is a brand ambassador of Nikon and has also worked with many clients for commercial projects.

Keith has worked with many Industries leading clients. Few of them are:

Keith is doing extremely well. If you are a beginner photographer and see your passion for it. Follow this person you will learn more than what you think.

The renowned nature and wildlife photographer of this time. Thomas is an American Photographer, who has traveled to every place on this planet to capture wild animals and nature over the past 40 years.

His love for nature, outdoor exploring, and photography success were extremely influenced by his Father. A professional sportsperson, Harold Mangelsen took his son to the riverside in Nebraska. To observe the Great flocks of birds migrated through the valley.

Exploring nature and observing the flocks of ducks, Geese and Crane develop his interest in wildlife. That’s the root of his keen observation and success as a famous wildlife photographer.

He has achieved many awards, honors and written many books in this field. He has worked on many conservation projects. His images are published in many magazines and books.

You have so many things to learn from Tom and implement them in your photography life.

Kristi Odom created her home outside of Washington DC. She loves to connect people emotionally to wildlife and nature. Being a wildlife photographer is also a Wedding photographer and a public speaker.

She is currently a Nikon Brand Ambassador and an internationally acclaimed Photographer. She is young among the many famous photographers and doing pretty well with her camera.

She believes in making a planet a better place for every creature. For that purpose, she travels the world photographing, and teaching. Sharing her message with her pictures and motivational Speeches.

Looking at her images will grab your attention and you will love spending time staring over her images.

Tim Laman is an Ornithologist and a renowned wildlife Photographer from the USA. He is more into capturing birds and other wildlife too.

He is often represented as an explorer, Artist, and a scientist to observe nature and its surrounding.

He is the contributing photographer for BBC wildlife unit, National Geographic Magazine, Cornell lab of Ornithologist, and Netflix.

A Biology Graduate from Harvard University turns to be an internationally recognized photographer.

His focus was to capture images of subjects that were most difficult to capture. Like Sunda Flying Lemur and Gliding animals in the rainforest of Borneo. Freezing the birds of paradise and endangered bird species.

He is recognized with many awards and honors in his long imaging career.

He has been exploring the world of professional photography for over 25 years. Would you like to climb the tree with him to learn whatever he has in his basket of experience?

Ami Vitale is a Nikon Ambassador and National Geographic Photographer. She is a wildlife and nature photographer who has traveled more than 100 countries to execute her vision. If you will go through her profile. You will get a clear picture that other than a photographer she is a caretaker of wildlife, nature, and human beings.

She has traveled around the world to cover the stories of violence and conflicts. To make people aware of how not to harm nature and wildlife. She found photography as the best tool to spread awareness among every part of humans.

“ In the beginning, photography was my passport to meeting people, learning, and experiencing a new culture. Now it’s more than a passport. It’s a tool for creating awareness and understanding across cultures, communities, and countries; a tool to make sense of our commonalities in the world we share”.

She has lived the situations to cover the stories. Let it be a war zone or a mud huts and even donned a panda suit to capture the essence of the situation.

She has earned many awards and honors. Her work has been published in many magazines and books. In 2009 she shifted her interest in photography to wildlife. When she came to know about the last White Rhino of the World.

She is a strong woman, who speaks up and who knows how to get things done.

If you are a photographer or love wildlife and nature. You will fall in love with her images. She is currently an ambassador of Nikon and contributing to National Geographic Photographer.

The Netherland born Frans Lanting is one of the great wildlife photographers. Later on, he moved to The USA for Environmental studies.

He has been documenting and photographing wildlife for the last three decades. His love for nature has made him travel around the world. Captured Wildlife from Amazon to Antarctica. In a mission to promote knowledge about the Earth and its natural environment.

He found photography as the best source of tool to spread awareness and show his concern about living beings.

He has set a standard for all the wildlife photographers, say BBC. Former Director of Photography at National Geographic, Thomas Kennedy says “ He is an extraordinary talent”. He has the mind of a poet, the heart of a hunter, and the mind of the scientist.

Capturing the wildlife and tribal traditions at Madagascar was something which was never photographed earlier.

His work has been published around the world in many different magazines. Few of them are emperor penguins in Antarctica, rainforest ecology in Borneo, and the troubled fate of puffins.

Frans has more than 100 solo exhibitions around the world. Three of his images got featured as The 40 most important nature photographs ever captured. He currently lives in Santa Cruz, California.

David Doubilet has spent his life in the sea. He has more than six decades of experience in photographing underwater life. He is a contributing photographer at National Geographic.

Exploring and documenting the undersea every corner of the world. From beneath Africa, rich temperature seas, tropical reefs, and recently beneath the polar ice.

His vision is to be the voice of the world of the ocean and show the people the unseen beauty of nature.

Davis is a contributing editor of many publications and has published 12 books.

If you are fond of underwater photography and passionate about seas do follow this incredible photographer.

Sue Forbes is a passionate wildlife photographer. She has worked for the Royal Air Force as an officer engineer. The silicon valley management executive chose her passion as her journey.

Now she is working for her real passion for teaching and traveling the world to capture the wildlife and amazing places.

She has visited more than 90 countries and is still exploring. Her goal is to educate the viewers and also to make them smile with her photographs.

She captures the behavior of wildlife to transport the viewers into their world. She loves clicking everything natural and sharing it with the world.

Her work has been published in many magazines and books. She has also got many awards and recognition around the world.

Sue Forbes lives in San Francisco bay and also provides teaching in photography. Go check out her gallery you will love it

There are many more Great Wildlife Photographers around The world. As I was to put 10 photographers on the list. It became a very difficult task for me during the research.

Though this 10 list is not a ranking provided by any authority. It is a list based on a few dimensions. In the process of my selection, I have studied more than 100 wildlife photographers around the world.

The purpose of this list is to provide a comprehensive guide to the budding photographers and those who love nature. There are many things to learn from these experts.

Learning wildlife photography from them can help you impact the world better than they are doing.

I hope you were able to provide you with some valuable information in one article.

Do comment if you have any questions. I would love to hear it from you.