Top 10 Street Photographers You Should Know 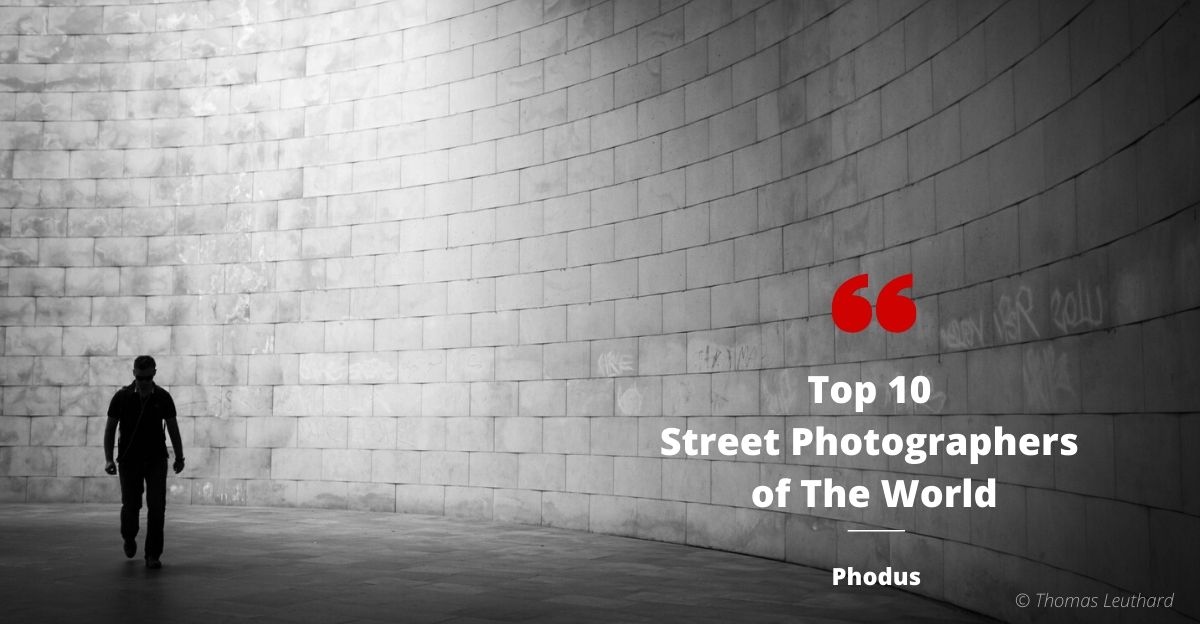 Know why? Street Photography is the best way to learn photography

Street Photographers know’s how to capture the reality of the outer world. The world that is out of your home, office, your comfort zone, and the most important outside of our inside world.

The world is the canvas and the streets are the frame that represents the face of the society, culture, tradition, and more.

It is the most effective way to learn photography and experience the beauty of it. If you are a beginner and wondering where to start. Don’t worry and keep reading.

You will walk through the experience of the top 10 street photographers in the world. That will help you understand and inspire you to get correct measures.

There are many famous street photographers in the world but we have listed only 10.

Top 10 Street Photographers to get inspiration

Boogie is a renowned street photographer. Who was born in Serbia and was later shifted to New York in 1998. In 1990 his country was in the civil war and that was the time he began his photography.

His style presents the darkest side of human existence in his pictures. It’s all because he grew up in a war-torn country.

He has worked for many high-end clients and his works have been published in many renowned publications.

Boogie currently lives in Brooklyn and all over the globe.

Boogie’s profile will capture the essence of the scene on the street. If you are an enthusiastic photographer and want to learn more. Do follow him and get inspired.

David is an American Street Photographer who lives in Carolina, New York City. His work sparks the Human mind.

He captures the blood and sweat of the people who migrated into America in his book, Cuba and Divided Soul. He explores Hip-Hop culture in his book “Living Proof”. His award-winning book in 2012 “Based on True Stories” has broken new ground on the photobook design and form.

His work has been exhibited in many art galleries and museum Like:

He has founded an online platform for emerging photographers, Burn Magazine. He is currently a publisher of Burnbooks and a member of Magnum Photos.

He currently lives in the outer bank of Carolina.

Go check out his work to get inspired and learn.

Rui Palha was born in Portugal. Who currently lives in Lisbon. Photography was his hobby from the age of 14 years. It is till now he has devoted his life to street Photography.

His work has been published in many magazines and publications. He has also received several awards and recognition.

He is an elite black and white street photographer. Who captures the soul of the people and takes you to the new world from his images.

He says photography is a very important part of my life. To discover the world, the street, and understand the livings. Learning and understanding the essential and practicing the freedom of being and thinking.

“Photography for me is my way of life, probably the main reason I am here in this world.”

He also provides workshops and lectures to teach budding and enthusiastic photographers. You can step into his galleries to learn and explore.

Bruce Gilden is an iconic street photographer with a very different and unique style. He was born in New York, Brooklyn.

He was pursuing a sociology course from Penn State University. Which he found very boring and left college.

From his childhood, he was passionate about the streets and the ways people face complications. This was the spark that inspired him to execute his first long term project. Like photographing during The Mardi Gras and Coney Island.

He wanted to become an actor but later on, he bought one camera and decided to be a photographer. He is also considered as a self-taught photographer.

In his long journey, he has produced many effective photographic projects in England, Russia, Japan, France, Haiti, Ireland, India, and now in America.

Since long back his work has been exhibited in many art galleries and museums around the world.

His work has been published in many magazines and blogs. He mostly produces black and white images. He is a member of magnum photos. Whose color image has brought worldwide fame?

Going through his profile and gallery will help you to learn and get inspiration from him to excel in this field.

Susan Meiselas is a strong fearless street photographer. Who has traveled to the unrestricted and war zones to become the bridge between the reality and the viewers

Her major project got focused when she was photographing women doing striptease at New England Country fair. She did it in three consecutive summers while teaching photography in New York.

She was born in Baltimore, Maryland in 1948. She completed her BA from Sarah Lawrence College and later on did MA from Harvard University.

She is best known for her project on human rights issues in Latin America and documenting the insurrection in Nicaragua. In 1976 she joined Magnum photos and since then she has worked as a freelance photographer.

There are so many things to learn from her apart from the photography skills only. She is the voice of the helpless people around the world.

Studying each of her projects and work gives such a deep message. Do check her work to get inspired and it may change your perspective.

Thomas Leuthard is a Switzerland based street photographer. Who travels to different cities around the world to capture the essence of street life. The document the ordinary life happening in the public.

He says there are many more questions to ask in photography, than asking which gear I use. Though currently, he uses a mirrorless camera.

He says I want to show the world of the street to the viewers, which they think is very boring. He started his photography career in 2009. When he 1st purchased his 85mm lens to upload it in an 85mm community group.

“Street photography is like a chocolate box, you never know what you gonna get”

You can get connect with him on this platform:

He loves to spend time with the same passion people. Also, he provides photo walks and workshops in his spare time.

A New York-born award-winning street photographer. Whose work has been exhibited in more and 350 countries and art galleries? He is the one who earlier advocated color photography.

Joel Meyerowitz has received many prestigious awards and also published more than 30 books. He is a recipient of the national endowment of art and humanities awards.

He also provides online masterclasses where you can walk by his side and learn from the 50 years of his experience.

He is available on following social media:

While on his journey he has been based in Rosario, Argentina, Since 2013.

His work has been published in many publications and blogs.

He is available in the following platform:

Go check out his work to learn and explore.

She is a Puerto Rican born Street photographer who is popularly known as “Moneris”. She lives near the outskirts of New York City. She is known for her visual storytelling.

Her education of BA in criminal justice couldn’t hold her against opting for her photography passion. She did her BA from Rutgers University.

She has more than 5 years of experience working with different brands and companies.

She claims that her life changed when her hobby became professional work.

She is a reader of human behavior and knows pretty well to capture them in her camera. She loves to capture the people around her and experience their life and share the stories with others.

“I hope for people to go beyond their senses with my images, as I wish to evoke emotion behind the lives that people lead.”

Paola Franqui is available on :

Follow her to learn and see how she had made so far working for so many reputed brands.

Lee Jeffries is a self-made street photographer also famous as portrait Photographer. He is from Manchester. He started his journey 10 years back with a mission to tell the story of homeless people and their culture.

Lee is available on

If you want to excel in Street photography or portraits photography do check to follow him and experience his work.

You must be wondering, that I have not listed many photographers on this list. Yes, you are correct. There are many more popular and famous street photographers around the world. But here I was restricted the list for10 researched one.

So in this article, we have selected them, after deep research and study considering the amateur and budding photographers. So that the beginner photographers can learn, experience, and grow.

If there is any personal favorite of yours which I haven’t mentioned in this list. Please mention their name in the comment section.

Also if you have a question, please comment below. I will love to hear it from you.