Top 10 Portrait Photographers You should Know 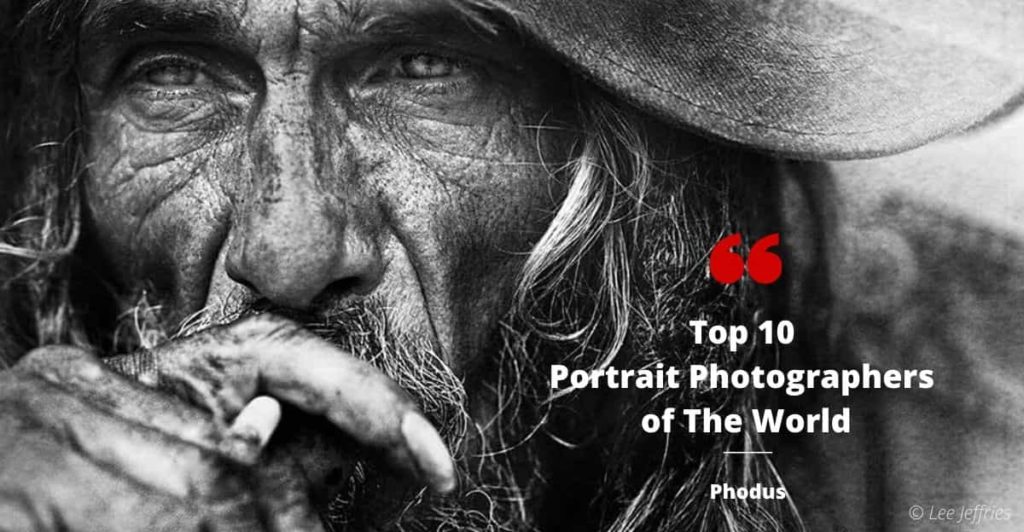 Dream big learn and get inspired with them

They portray the emotions of the subject in their photographers. So many photographers have made an impact on this field. But here in this article, we have chosen the 10 photographers only.

These 10 are not the only best one in the world. But the selection has been made with deep research and study. To provide the source of inspiration and learning. Following these people will help you to put your step into the forward direction.

This blog post is for all the photographers who want to learn and excel in life with their cameras.

Top 10 Portrait Photographer to get inspiration

Steve McCurry is a portrait photographer based in the USA. The iconic person is famous for his contemporary photography. He has more than 30 years of experience in this field.

His work has been published in many magazines, books, and other publications. Also with countless exhibitions around the world.

After finishing his studies in films from Pennsylvania university. He has worked as a freelancer for several years. During that phase, he has visited India to cover a story and from then he has been there countless times.

Making his way to another subcontinental, with his camera, exploring the country. Traveled there with a few clothes, bags and rolls of film. Yes, he is so passionate and curious about his work.

“ Each picture stands of its own, with its place and feeling”

You will be surprised when you will go through his gallery. I bet you will hover over many pictures that will be familiar to you. As you must have seen in social media, magazines, or some other place.

Joe Mcnally is one of the internationally renowned portrait photographer. The award-winning photographer has traveled to more than 70 countries for his assignments.

He is a Nikon ambassador and also contributed to national geographic magazines.

He is popular worldwide as a top photographer of his time with his technical knowledge. Apart from that, he was well known for his charming nature, confidence, and humor. That’s the reason for many CEO’s, celebrities and magazine clients to select him as a priority.

He has worked for many high-level clients and his work has also got published in many cover magazines around the world.

The USA based photographer stayed in Connecticut with his wife. He has a million followers on social media and is still growing.

You can follow him to learn how he is doing and explorer in this field.

Martin Schoeller is an Internationally acclaimed contemporary portrait photographer. This german man is known for his extra-close portraits.

He studied photography from Lette Verein and he moved on to New York where he started his career.

While in Germany he was influenced by the countless portraits of the poor clicked by August Sanders.

His work has covered close-up portraits of high-level personalities. Like the world leaders and indigenous groups, athletes and artists, celebrities, and the homeless capturing their real personality.

While capturing portraits on streets his works have got a lot of recognition. It’s been more than 22years now his work has been published in many publications and magazines.

He has contributed to publications such as The New Yorker, Rolling Stone, National Geographic, Vanity Fair, The New York Times Magazine, TIME and QG, many more.

Schoeller’s work has appeared in major print and motion advertising campaigns from automobile, to entertainment and pharmaceutical.

His work has been exhibited worldwide. And his solo exhibition has appeared in Europe and the United States. And also displayed permanently in the collection of the National Portrait Gallery, Washington DC.

Martin currently lives in New York USA. If you are a photographer and love to capture different faces and want to make more in life. Then you should follow him to learn and explore.

“If you change the way you look at people, the people you look at change. And if that change is powerful enough, it will gather momentum to affect the whole of humanity”

Such a unique paradigm this person has and is still exploring to find the unnoticed ones.

Jimmy Nelson is a famous English portrait photographer who loves to capture tribal and indigenous people.

He was born in Sevenoaks, Kent England in 1967. He has spent his childhood in South America, Africa, and Asia, traveling around the world with his father. His father was a geologist at the International Shell of the British government.

At the age of 7 years old he was sent to a boarding school. At the age of 16 due to a disease Alopecia Totalis, all his hair fell off.

At the age of 17, he left his boarding school and went to Tibet for trekking and came back after 2 years with lots of images collection.

His work got published in National Geographic and many other magazines.

Let’s check out his books

If you love to explore and portraits of humans. Then you must follow him. You will get mesmerized by the level of perspective and work he has done.

Go check out his galleries and read his books. You will know the value of the unseen humans.

Eric Lafforgue is a France based portrait photographer who travels the world to capture the change. Since 2006 when he started publishing his pictures on the internet. He got featured in many magazines and publications.

He has worked with many big companies and organizations like Lonely Planet, National Geographic, Grands Reportages, Le monde, Der Spiegel, times, and many more.

Eric approaches humanism in his pictures and the travel stories that he captures visiting different countries.
Eric is a Hans Lucas studio member. His work has been exhibited in many places and published in many magazines.

There are many more exhibitions held on his work.

It looks like he wants to portray every individual on this planet. If you want to excel in capturing personalities of different countries and cultures. Then do follow this ongoing photographer.

Lisa Kristine is one of the most famous portrait photographers. Also known as internationally acclaimed fine art and humanitarian photographers.

She is a strong activist and speaker. Who has experience of 30 years of documenting the indigenous culture and social causes? She has traveled to more than 150 countries around 6 continental.

As a child, she was influenced by her mother’s book and National Geographic magazine.

Lisa’s work has been showcased in many exhibitions and also published in many magazines and books. She has worked on major issues of the societies to document them and spread awareness among the other people around the world. Like :

You will love the way she captures the essence of the human spirit into her photographs. You should follow her and see how she is bringing change in the society. You can learn a lot from her work.

Phil Borges has been documenting indigenous and tribal culture for over 25 years now, seeking to create an understanding of the challenge they face. He is an internationally acclaimed portrait photographer from the USA.

The books are Enduring Spirit, Tibetan Portrait, Tibet: Culture on the Edge, and Women Empowered.

Phil has graduated from the University of California. Currently, he lives in Seattle with his family.

He talks about social issues being the voice of them through his photographs. Do check his work and follow him to learn and grow in your life.

Annie Leibovitz is popular as a celebrity portrait photographer. She is based in the USA and is famous for her intimate poses and settings.

She has a great year of experience in this area. She has portraits of world-famous leaders, celebrities, sportspeople, and popular personalities. Her work has been published in many authorities and magazines like the Rolling stone.

She is the one woman who has been featured in the Washington National portraits Galleries.

Annie Leibovitz is one of the most famous personalities in the field of photography. If you want to know how she has made this far. Do check her profile and follow her to learn and grow more rapidly.

Réhahn is a documentary-style portrait photographer who captures the soul of his subjects. He has got a unique style of photography where he combines fine art with the documentary style to portraits the people.

He has visited more than 35 countries before making Hoi An, Vietnam as his home in 2011.

Wanderlust travel magazine says “ He is the person who captures the soul of his models”.

Behind his every click there is a story. He is a player of portraits who knows how to capture the personality. His pictures are more than an image to him. Whether capturing a woman pulling a needle, a child playing in the street, or a girl smiling in her world.

These are the collection of his experiences. His stories represent his passion to learn more about culture, changing tradition, and diversity. That’s what drives him to be exceptional.

Rehahn’s work has been published in many magazines and books. His work has also been displayed in many exhibitions. Like

If you want to feel the story of different cultures and traditions. Go check his work to get inspired and learn from his work.

Lee Jeffries is a self-made portrait photographer from Manchester. It has been more than 10 years when he has started his mission to tell a story of homeless people and their culture.

His work has been published in many magazines and blogs like :

He has also contributed in a few movies The voyage of Time and NCIS season 11. If you want to excel in portraits photography. Follow him to learn and grow. He is also available on social media Instagram and Facebook.

The list is based on the deep research made by our Team. We have followed a few parameters to select these renowned photographers.

The content is produced to provide deep value to the budding and inspiring photographers. Who wants to learn and grow.

If you are a beginner and want to establish, do study about these photographers and see how they have made it.